Shaitan Nocens is a self-styled philosopher and former Emperor of the Imperial Senate. His skills include blacksmithing and state affairs, though he was also once a baker. At present he is a private citizen with a home in Lios Mor.

Although a former Earl (of Canterbury and Erroll), he lost both titles, and his coat of arms, upon losing favor with the crown. Emperor is considered (by him anyway) to signify sovereignty, though not over a particular land. The following is the seal of the Emperor: 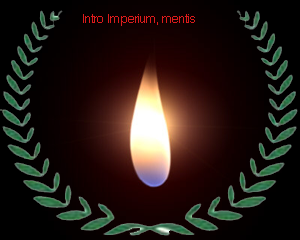 He often claims to have originally been an "imp," in the service of an army that was opposed to Jah. Certain records in Sussex do in fact indicate sightings of an "imp" (or even two) by the name of shaitan, it is unknown whether these are local superstitions.. He claims he lost the form due to a ritual sacrifice in which a priest traps an imp in the priest's own body. Certain references do exist also to other descriptions of humans with the same name, Shaitan Nocens (occasionally with a "Halliwell" or some such added on), with vastly different bodily features, ranging from Romanians to Italians to the present human who is apparently some mix of Spaniard and englishman, though that could possibly be untrue. Those who do not believe in "imps" going about possessing and being trapped in bodies would likely surmise that "Shaitan Nocens" is an assumed title for a series of rebels with similar goals.

It is unknown what descent the present human holding the name "Shaitan" has, although rumors have begun to circulate that a Balboa is his illegitimate mother. Records indicate one human claiming the name Shaitan was by his own statement a Halliwell, although he burned down the Halliwell manor at one point. This person (who the present Shaitan identifies as himself, though he denies that the Halliwell relation was factual), was married for a time to Malachia, though the marriage was annulled when he went missing and presumed (leading to a great deal of scandal when he came back, to find her in another marriage, which led to annulment of that one as illegal).

In September 1456, Shaitan married Keelie Adlum, with whom he presently has six children. Rumors also circulate that he has a seventh by ​Siubhan.

Since disputes are active as to the degree of identity of the various "Shaitans," and the current one claims most as himself, they shall be treated here collectively.

The first sighting of a "Shaitan" (as an imp) was in Marlborough, although he quickly took to the road to Salisbury, where he met Anto_capone and other members of the Old Imperial Senate. He quickly signed up, and eventually ran for mayor of Canterbury with their endorsement (he obtained two terms out of three attempts). Canterbury's Market Square is named in his honor, as he claimed to be the first English player to discover grantlocking during those terms, and also claims that the treasury quadrupled in his time there. As Judge of Munster County, he enforced a view of the common law that it was derived from the same principles as the laws in the nearest source of civilization to the country at colonization were formed based on, minus any explicitly disavowed thereby.

He also ran for several terms on the council of Sussex, some of which he won. He held several positions, and claimed to be the first Trade Minister anywhere to develop the County buyer system. He did not succeed in removing the county from debt however, although the deficit did reduce in his term.

He claims that during his term as mayor, he was serving as "Intelligence Chief and PR director" for the early incarnation of NNGO, which led to an important role in the Invasion of Dieppe. Anto_Capone holds he was a founding member.

He held the rank of Centurion in the Old Imperial Senate structure, which was technically classified as Imperial Army rather than senate, although he claimed to be in on all the leadership discussions at that point.

He also for a time led a guild of troublemakers known as Mischievous Creatures, the records have since been burnt by a team of Censors led by Isabella.

During the recent NNGO Attack on Aragon, he served in the army and led it for a few days as a result of Anto_capone being wounded, though Anto negotiated terms of surrender during Shaitan's third day of leadership.

The Imperial Senate has thus far not run for office anywhere as such, it's activities have been limited to recruitment, arguing, and perhaps a few things that this wiki doesn't know about. (Note: Imperial Senate has since been shut down, after Munster made requested changes to legal corpus.

There was a court scandal regarding the English and Scottish courts receiving copies of his first book, The Sins of Jah, a critique of the Aristotelian dogma.

Shaitan rode the maiden voyage of the Nomad to Scotland, writing the justification for NNGO's invasion of England. He was grievously injured in battle after several kills, and remains stuck due to such as of this writing.

Retrieved from "https://renaissancekingdoms.fandom.com/wiki/Shaitan_Nocens?oldid=22330"
Community content is available under CC-BY-SA unless otherwise noted.