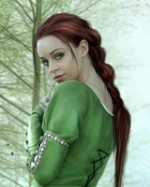 I am Melanie Bolton, from Duncan family. I am 27 years old. I live in Wigtown.

I have been awarded the honoured of being part of a County Council three times, and the honour of being elected Chancelor of Galloway.

The Bolton family was from the outskirts of Galloway. Their land was very fertile which allowed them to have wheat and vegetable fields and fruit trees. In the center of the land was a lake with fish and close to it a forest. The kids always playes in there, hide and seek mostly. More than once, the adults had to go into the woods looking for a missing child but they kept playing anyway.

A long Bolton family lived in those peaceful lands until one day.

That night a letter from the Crown of Scotland arrived to the Bolton house. As always, a war was destroying Scotland and the country was needing the food and goods from the Bolton house. However they were also requesting the presence of all the men that could fight in a war. The family was puzzled, they never asked to be part of the war as soldiers, they were never a fighting family. Despite this fact, all the men travelled to the heart of Galloway, Wigtown and presented themselves for the battle and to deliver the goods.

One of those men was her father, Henry Bolton. He was barely 18 years old by that time. After the war ended, Scotland was very hurt. People did everything to help rebuild it, even Henry. He ended up living in Wigtown not wanting to return to his land, he felt that this town needed him more. So after he said by to the rest of the family he lived in Wigtown as a normal citizen. He was in charge of receiving the goods from the Bolton house.

After some months he found a beautiful girl in the market, she was called Roselynn McLeud. Another scottish woman who worked as a miller in Wigtown. he fell in love immediately. At first she would ignore him, but after a few tries she finally let him court her. She saw that despite his naughtyness, he was a good guy and eventually fell in love.

Three years later they got married. And one year later more htye had a child, Melanie Bolton. But again they didn't see the danger that was arriving. The night of the birth, a huge English army invaded Galloway with no notice. Noone was prepared for what they encountered. More than 1000 soldiers all together fired the town and killed whoever they found alive.

Henry and Rose were woken up by the screams of the streets. When they looked through the window they found out that they were being invaded. He went out to fight with the few men that were trying to resist the attack. Meanwhile, Rose hid her child in a safe place close to a church they had behind their house. The church was already abandoned so she hoped that the English wouldn't go there. She left her child there and returned to the town just to see how her husband was being killed by two englishmen who ran to her and ended her life too.

After two weeks or more, the rest of the towns and Glasgow helped Wigtown to get rid of its threat. They lost a lot in the battle, specially people. Wigtown was desolated, almost in ruins. Some people from other towns decided to help rebuild Wigtown.

One day, a priest was walking past the abandoned church and he heard the cry of a baby. He got inside the church and found a little baby of maybe one year old, all dirty and skinny, apparently starving. She couldn't let her die there so she carried her back to the town. The people there thought that maybe someone tried to save her during the war, they didn't know how right they were. A woman took the girl and gave her milk, she drank it desperately showing how hungry she was. Then she was cleaned and controlled by a doctor. He said she was very hungry for not being given good for so long but that it was a miracle that she survived. They didn't know who she was but the priest's family raised it as if she was her daughter.

Because of curiousity, the priest decided to visit the church once more to see if there was nothing that would say who she was. After a thorough search, he found a letter that was hidden by the dust close to where he found the girl. It said:

"Please whoever finds my daughter, please raise her as if it was yours, she is called Melanie Bolton. If you are reading this it is because I am dead and her father too. So please don't leave her abandoned here.

The priest kept the letter and returned to his house and named her as she should, Melanie Bolton.

Raised by a priest, she learnt how to write, how to read, some maths and religion. And the nuns of the church taught her the how to of the housework.

At 21 she decided to go pursue her past. She left the church and returned to her parent's house in Wigtown. She rebuilt it completely, built a mill and prepared two wheat fields. She didn't know why, but she had a desire to work the wheat since she was a child, so she did. She became skilled in everything related to wheat and flour. She loved living there and by her own and was happy she could manage so well. She was curious about her family but there was nothing that would lead her to find more.

Almost four years later she met a man, Darian Duncan of Duncan family. She fell in love with him. They courted and even had a baby boy, Kylan Duncan. But everything ended without marriage due to a trust problem. However she keeps being part of the Duncan family.

After that she kept living alone with her son visiting her sometimes and others being in the Duncan's house at Bladnoch.

She travelled to England once with Lady Guinevere (Gwen), Kitten, Vlad and Bogwon. She made friends there and with the members of the group.

She then started living with kitten since they were very very close, but kitten keeps travelling a lot (not being on the game active).

She also travelled to Girvan and now is in there too. She met a lot of good friends and a man who got her heart. She returned to Girvan for him again. She knows she will have problems with her family because of the rivalry that exists between the clan chief and the man she likes, but she hopes that everything works better than expected or at least she can have her happy life. She knows she is happy with him. She will have to move to Girvan to be able to live with him and maybe have more than only a relationship, but that only time can tell.

One day, she was searching her house , cleaning it and found some lost papers that she never saw in a treasure box that she missed a lot of times before. There was the letter from her mother and papers giving her the ownership of the house and telling her who she was. There was no contact for her from the Bolton house, they may think that she is dead or they don't know her existence. But she didn't care, she was happy she knew why she was called Melanie Bolton.

That day a priest was seen close to Melanie's house with a treasure box that then he didn't have anymore.

While living her life, she made interesting and important contacts in the town and the County that is why she got her jobs.

Chancellor Wallace, who then became King and now is deceased, hired her as ambassador. She was assigned the Spanish counties, due to her spanish knowledge from church, of Aragón, Valencia and Castilla. She tries to do her job the best she sould but no contact was made. After that Chancellor Eira hired her again but this time for the Duchy of Milano in Italy, again for her knowledge of italian from the church. She signed a treaty with them and keeps working with them.

She also participated in Duke Calum's County Council her first experience as Mines Superintendent. It was a hard job where she made some mistakes but luckily nothing very important and finished her term perfectly. After a lot of months and a war in Galloway she is enlisted in Duke Biscaia's list and works as Spokesperson, but it is then transferred to the Trade Minister office because one of the Council members was unable to keep doing the job. There she learnt a lot. The next term, she is asked to joinned, unlike the previous one where she had to apply. Again she works as Spokesperson but it is transferred to the Public Prosecutor's office due to the decease of the ex PP. She still works there.

Now she wants to make her own list, not for the sake of becoming a duchess but for the sake of helping Galloway become what it used to be before when she just arrived to it. She is now 27 with a passionate heart.

Retrieved from "https://renaissancekingdoms.fandom.com/wiki/Melanie_Bolton?oldid=23348"
Community content is available under CC-BY-SA unless otherwise noted.