Back to Marya's other writings

It usually rained in May, in Little Twitching. Not in Greater Twitching, or in Higher-Bredon-on-the-Hill: they had Maypoles, and welcomed in the Spring with dancing, so that she stayed. But Little Twitching was too small to have a proper Maypole, set firmly in the Green, with gaily-painted stripes and bright ribbons, so every year grey drizzle stopped the crops ripening until late.

"We could have a Maypole," said Vaurien one evening, as they sat in the Green Man over the third ale. "It's only a pole, and ribbons, and dancing. Doesn't need to be a big thing."

"Got to be big enough to dance round," said Cedric. "No good ducking under the ribbons before you even start." He was a tall man, and knew about ducking under doorways.

"So have short dancers," said Vaurien. "Young Holly's only a slip of a thing, and your little Sarah's old enough to dance. Keep it simple, we won't have enough for the big dances anyway. Pole's got to be taller than the dancers, that's all. Why, have the little lasses dancing, a broomstick will do."

"And how're you going to hold it upright, then? Bottom foot in the earth, there's not enough left for the ribbons. Going to stand there an' hold it up?"

They tried this. The leash from Vaurien's dog was pressed into service as a ribbon, over the dog's objections.

"You can clear up that mess, right now, said Holly, as she brought out the next round. "And mend that stool, too."

They sat and looked at it, as the ale went down. "Pull on the ribbons, it all falls over," said Cedric, who had not been doing the pulling. The dog yapped in agreement. "Needs something heavier. Or a tree, like the goodwives tie the washing to."

"Can't dance round a tree, ribbons 'ud get tangled in the branches."

"Cut the branches off?"

They considered the bare, mangled, leafless stump that would create, as a way of welcoming Spring.

"Heaviest thing in the village's the anvil."

“Tom'll never let you borrow his anvil! Anywaysup, how'd you expect to move it?”

“Got it in the forge, didn't we? Stands to reason we can get it out again.”

If they, or the horse, had been sober, this would probably not have worked. "You sure tha's right for the wee maids?" Cedric asked doubtfully, as they surveyed the result. They all knew what the Pole was meant to symbolise. Attached to the most potent tool of male magic in the village, this was even more obvious.

"Well, it should bring Lady Spring running, that's for sure. But if ye think the young 'uns might be confused, cover it. Wrap a sheet round it or summat."

On May Day morn, seven little girls yawning in the early light, with Holly leading them, danced round the Maypole to the sound of Vaurien's pipe. The ribbons only tangled a little bit, and they unwrapped smoothly enough to please anyone. They danced it again, later, simply because it was fun, and once more for luck, and because Cedric wanted his sister from Greater Twitching to see young Sarah dancing so well.

And that Spring, and summer, the sun smiled on Little Twitching.

It was hot in Little Twitching that year, hotter than they had ever known. Too hot to stay indoors of an evening. They sat outside the tavern, listening to the news brought by the travellers that came to visit, now the lane there was free of mud. Traders' wagons hadn't liked getting stuck, and the exotic painted wagon - red roses for the county, and yellow buttercups for the owner - that had arrived that day had brought interesting news.

"An Arts Festival? In Lunnun? What's one of them, then?" Cedric had travelled as far as Greater Twitching, once.

The tale that followed probably confused more than it explained, but a few things became clear as the newly-passable lane. "So everyone from all over travels to Lunnon, an' shows how good they are, and gets showered with gold? And marries the Regent's daughter?"

"I never said that! The Regent doesn't even have a daughter. He's got a little dog that he's very fond of, though" the trader added helpfully. Her own puppy and Cedric's dog had been exchanging mutual sniffs for some time.

"Still, there's the gold... and the fame.... I reckon," said Cedric thoughtfully, "that we should go and show ourselves at this Festival. Vaurien, you can play that pipe a' yourn, you can do the music bit. An' my Sarah can do all sorts."

It has to be said that leading the smaller dancers at May Day had perhaps gone to Sarah's head a little, and had certainly gone to that of her father.

"Come on, she's a little girl from a village they've probably never even heard of. What's she going to do? She can't sing. She can't act - well, she can act up."

"She can dance," Cedric said defensively.

"All right, she can dance - a little. Around a Maypole. T'was bad enough getting that anvil out on to the Green, how d'ye think we'd get it all the way to Lunnon?"

Buttercup (for that was her name) indicated her wagon. "You'd be surprised what you can get in one of those."

It turned out that the wagon, and the horse pulling it, could indeed carry an anvil, a broomstick, ribbons, laces, knives, sausages, rabbits, and many other things, including eight people. But which eight? Too many of the mothers of the original dancers had the same answer. "If you think I'm letting my daughter go all the way to London with you two...!" Even Holly's offer to chaperone the younger ones was to no avail.

"Can't do it with only three dancers," Vaurien said gloomily.

"Let the boys in, too? Your Corwin's a dancer - well, he is if it lets him near the girls."

"So we do a different dance, one were we can have tall dancers as well. Two rings. Get one of the wives to come along, make two rings of four, adults on the outside. We'll need to practice, but it's many days travel to London, there's not much else to do on the nodes."

So, as they say in the sagas, that's what they did. By the time they got to London, their world was a lot bigger, and their dance was a lot better.

It was, again, early morning when they set up the Pole outside the dancing tent, and they had a different reason for hiding the anvil. "Think we want everyone knowing we can't do a proper Maypole? In front of all those nobles? Nay, hide it - an' make sure the sheet's clean!"

It worked. Sarah didn't bump into Corwin more than a few times, and that was only because she was looking at the audience more than at where she was going. And, once more, the sun shone down benignly on their efforts. 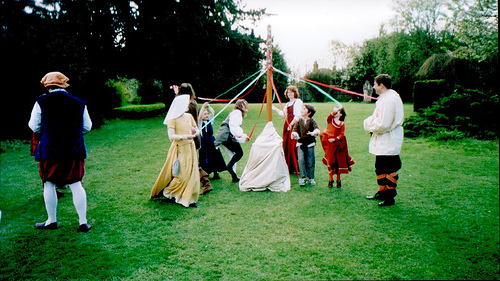 Retrieved from "https://renaissancekingdoms.fandom.com/wiki/MaryaFolkDance?oldid=16479"
Community content is available under CC-BY-SA unless otherwise noted.