The Innes family is a Scottish family residing mostly in Galloway County. The family is active in the affairs of the kingdom, with members heavily involved in the Lyon Court, Galwegian politics and the church; it was made official by the Lyon Court on the 31st of May 1458.

The current Innes family came into fruition when Flaithbheartach de Innes, OHSR, ODE, was reunited with his stepson Jethro Campbell, who on the 13th of July 1458 married Ceana De'Holland, bringing her into both the Clan Campbell and the Innes family. A series of random letters between them, sparked by hearsay, uncovered that Wardorf Hooper and Flaith were second cousins, reconnecting Wardorf with the Inneses. 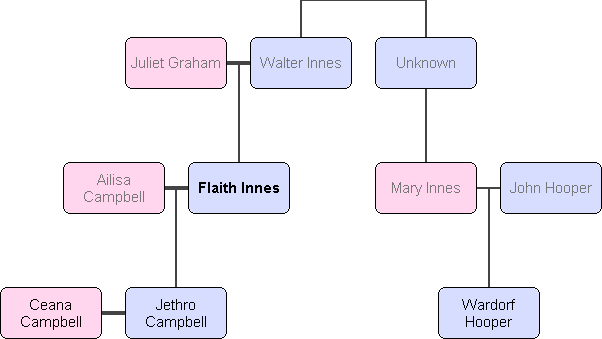 Retrieved from "https://renaissancekingdoms.fandom.com/wiki/Innes?oldid=20122"
Community content is available under CC-BY-SA unless otherwise noted.