Dorchester was a town in Wiltshire, England.

Dorchester is a seaside town situated in the south of the former county of Wiltshire. It lies between Chard to the west and Southhampton to the east (node 358) 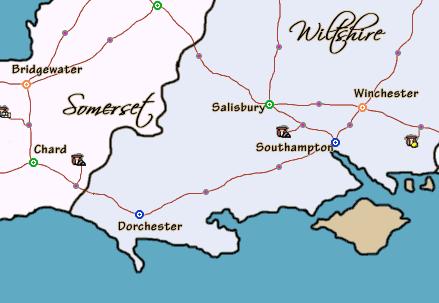 The town uses a Fishing Map to maximise fish yields.

There are two taverns in Dorchester currently - the Lady of the Lake and Harbour Lights.

The Lady of the Lake is the town hall tavern.

A place where the citizens of Dorchester gather and discuss news and events. It is the ingame forums for Dorchesterians.

The first written record of Abbotsbury dates to 1023, when King Canute granted land in the area to his steward, Orc, who later founded a Benedictine monastery here. That monastery was to become one of the wealthiest in Dorset. It is situated about 3 miles from Dorset.

Citizens just have to ring the bell to take sanctuary, and trust points will be given by other citizens.

The current priest is Ecthelion.

A place to "to discuss the various issues concerning the economy and fair price buying for the town of Dorchester."

The bank is run by Marche and is based in Dorchester Hall. It provides citizens with a place to loan and desposit pounds. There are interest rates in place.

A local newspaper published by the citizens of Dorchester. It is a comprehensive newspaper; publishing news, commentaries, interviews, stories and art about Dorchester.

Dorchester is home to Leviathan, a sea monster whos gender is still unknown. Leviathan has also been linked romantically to MakaWabli, the current mayor. However, the relationship died after it was known Leviathan planned to run for mayor against him. It has been questioned if Leviathan has mind control powers.

Mayor MakaWabli is a self-proclaimed nudist. Eyewitnesses include Kenna.

Spuzzana and Graciebells, the recent newly-weds, partnered with the lightbulb Marche under orders by Mayor MakaWabli, will travel to Ireland on a honeymoon to retrieve LadyJen.

Marche has a long lost brother who recently made a house entirely out of corn and vegetables.

On 8th August 1456, the Sifters: Mystery Investigators was set up to solve mysterious occurances in and around Dorchester. Current members are: Solunar, Timkeykong and Oncelot.

Retrieved from "https://renaissancekingdoms.fandom.com/wiki/Dorchester?oldid=25343"
Community content is available under CC-BY-SA unless otherwise noted.