County Palatine of Chester was discovered in May of 1455. It is a small county and lacks a stone mine as well as a fruit Orchard. Its capital is Chester. 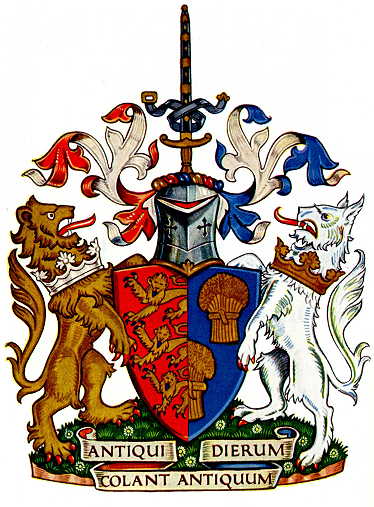 ARMS: Gules three Lions passant guardant in pale Or dimidiating Azure three Garbs Or.CREST: On a Wreath Or Gules and azure a Sword erect hilt and pommel Or within a Sheath Sable encircled by a Sword Belt of the last both garnished Gold. Mantled on the dexter side Gules on the sinister side Azure both doubled Argent.SUPPORTERS: On the dexter side a Lion Or gorged with an open Crown Argent and on the sinister side a Wolf Argent gorged with a like Crown Or.BADGE: On a Roundel per pale Gules and Azure environed by a Wreath of Laurel Or a Wolf's Head Argent langued also Azure issuant from an Ancient Crown of Gold.

Retrieved from "https://renaissancekingdoms.fandom.com/wiki/County_Palatine_of_Chester?oldid=13663"
Community content is available under CC-BY-SA unless otherwise noted.