The symbol of Order is a red cross on a blue field. The official motto of The Order is "IN OMNIA PARATUS". Their unofficial motto, which is as well known as official one is "PRO PATRIA VIGILANS".

The Order is best known for protecting their homeland Kingdom of Albania, in times of troubles and threatened by rebels. The biggest war was against Albanian-Italian groups "Black Eagles" and "Ordine Brigante".

The greatest victory of Order was against the war with BE-OB that started in Albania, town of Lezhë on March 1459 and ended on May.

In the beggining of the year 1460, The Order shows his power on sea by destroying three ships of enemies with their biggest ship named Redon a.k.a "Dragon of Adriatic". On the same year, at March, Queen Lukrezia Augusta deployed with her army in city of Lezhë and attacked rebels together with other army of the Order leaded by Leka Dukagjini. On 21 March 1460, rebels surrender and were defeated and the Order arrives another victory.

The Heraldry of The Order: 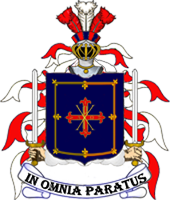 Sergeant
Add a photo to this gallery
Retrieved from "https://renaissancekingdoms.fandom.com/wiki/Constantinian_Chivalric_Order_of_Saint_George?oldid=26300"
Community content is available under CC-BY-SA unless otherwise noted.